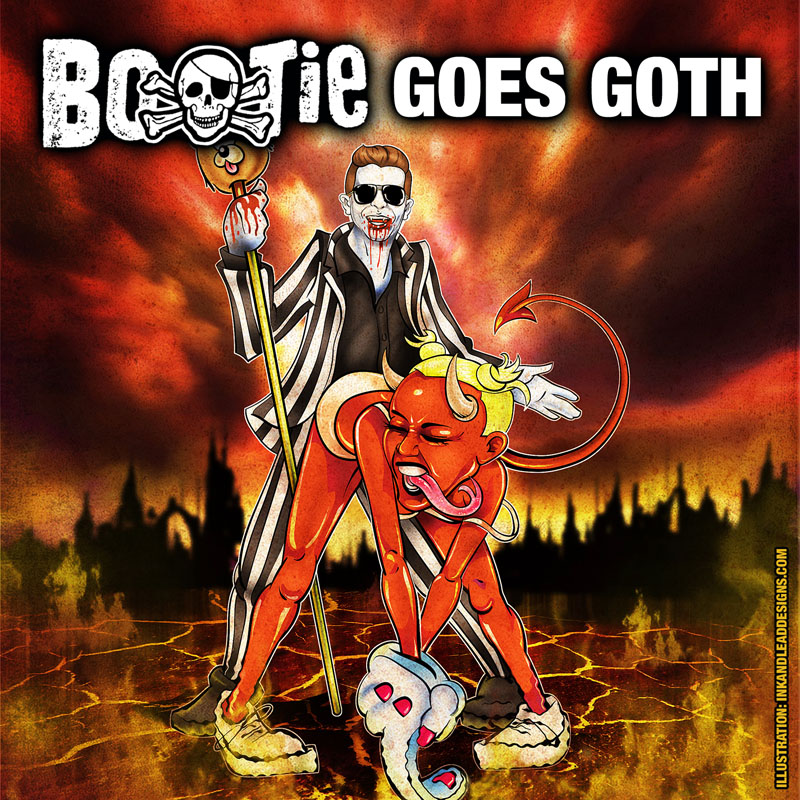 Last year, shortly before Bats Day In The Fun Park (the annual unofficial “Goth Day” at Disneyland) Joe Stewart of SceneSnaps.com asked me – Bootie’s resident “recovering goth” – to compile a mixtape of goth mashups. I’d spun a few guest DJ sets of all-goth mashups at such venerable darkwave clubs as Death Guild in San Francisco, and Das Bunker in Los Angeles, and for years, I’ve done a goth/industrial mashup “fight set” at Burning Man, as part of Death Guild Thunderdome, as well as spinning at the post-apocalyptic Wasteland Weekend. Needless to say, I have a fairly large collection of goth/industrial mashups, including several we’ve made ourselves as part of the production duo A Plus D.

I love a theme, and while I certainly love ALL genres of music, the goth stuff holds a special place in my dark little heart. I’ve had this mixtape compilation in various forms in my Serato crates for years, so I was quickly able to compile a bunch of favorites — with the Bats Day audience in mind – and I sent it off to Joe, who burned a very limited amount of CDs to give away last year.

This coming weekend, however, is the very last Bats Day. (Yes, it’s okay to cry.) Plus, Wave-Gotik-Treffen, the largest goth festival in the world, happens in two weeks in Leipzig, Germany. So now seems like the perfect time to finally release this mixtape online. It definitely skews more toward the “pop” side of goth (as would be expected from Bootie Mashup), with Nine Inch Nails and The Cure represented by three tracks each. (Of course, the fact that these two artists have so many songs that have been mashed up certainly helps.)

It kicks off with one of the classics from the early days of the U.K. bootleg scene (proving that not all mashups have to be funny and cheeky) and many of these tracks are meant to get you spooky dancing, “pouring the tea” and “clearing the cobwebs!” Of course, this being made for a Disneyland-bound crowd, there just had to be a symphonic metal mashup of “Let It Go” on there as well!

This is just a small sample of the gothy goodness we have in the Bootie Mashup archives, and this mixtape could have been hours long – but we like to keep everything just short enough to fit on a CD. Call us old-school that way. Perhaps if the demand is there, we’ll do a Volume 2. In the meantime, get your goth on!

13.  Fissunix – Let It Burn (Idina Menzel vs. Within Temptation)

14.  A Plus D – Love Will Tear You Apart / She Wants Originality (She Wants Revenge vs. Joy Division vs. Bauhaus)