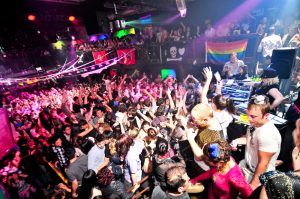 Showcasing the best mashups (and mashup parties) in the world ever, Bootie Mashup is a collective – led by “Queen Mother” Adriana A – of pop mashup DJs and producers from San Francisco, LA, New York, Berlin, and beyond, who take two or more songs and combine them into fun, creative, hybrid hits. In IRL, we throw regular mashup parties in San Francisco, Los Angeles, Seattle, New York City, and beyond. On our BootieMashup Twitch channel, we livestream over 35 hours of mashup programming each week.

Bootie Mashup was launched in San Francisco in 2003, shamelessly mixing and matching pop songs both throwback and current. With its creative theme parties and clever mashup formula, Bootie Mashup has been winning numerous nightlife awards in multiple cities for over 17 years. Its fun, danceable song combinations are the soundtrack for the A.D.D. generation.

Our DJs have weekly themed shows on the BootieMashup Twitch, and the team is as mashed-up as the music, with a mix of gender, race, sexualities, and nationalities, but all united in our love of a musical artform that smashes genres and boundaries. As the first and biggest mashup dance party in the world, we take pop songs from every genre and era and mash them up into one big dance party where everyone feels welcome. Our DJs (and SF mashup house band Smash-Up Derby) keep your brain guessing and body dancing with creative song combinations, celebrating — and satirizing — the many different forms of music. Bootie Mashup also presents the infamous Midnight Mashup Show, featuring drag and burlesque performers as well as singers, aerialists, and dance troupes. Because one song at a time just isn’t enough! Genre-fluid and plamp-free since 2003! 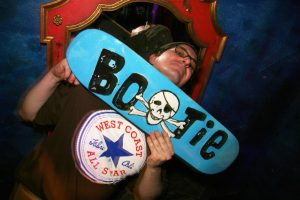 So what’s a mashup? What’s a bootleg?

It’s pretty much all the same. When the scene began to galvanize in the U.K. in the early ’00s, they were known as “bootlegs,” due to their illegal nature. Elsewhere in the world, they became known as “mashups.” Basically, this means the vocal track of one song is mixed over the instrumentation of another. Using audio editing software, DJs and mashup artists combine different artists and musical genres to create new and unique songs that are often greater than the sum of their parts. Imagine Lady Gaga rocking out with Nirvana, David Bowie crooning with Daft Punk, Madonna fronting Maroon 5, or Kanye West rapping with Beethoven, and many other unexpected combinations!

Does the skull-and-crossbones in our logo mean anything to you?

So where can I get these mashups?

Since 99.999% of all mashups aren’t legally cleared by the artists, you can’t just go to a store and buy them. However, MP3s of these bootleg mixes are available all over the internet. Click on some of the links: Bootie Mashup Top 10, Best of Bootie Mashup & Theme Albums to find some for yourself!

Or, just come to a Bootie Mashup party!