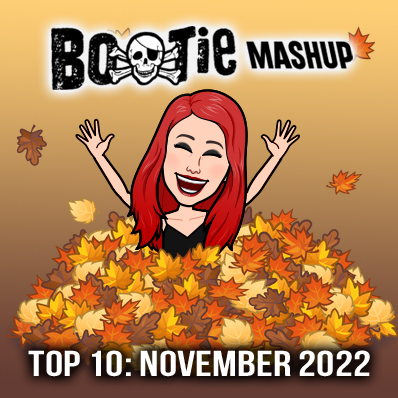 Now that the long Thanksgiving weekend is over – which gave us time to listen to a bunch of new mashups – we’re ready to post another Bootie Mashup Top 10. Since the Christmas season can now officially start, we kick it off with Voicedude‘s Mariah-free version of surely the most-overplayed song of the season, followed up by a treat for the Swifties – a surprisingly megamix-free A+B from Girl Talk, making a triumphant return after years of dormancy. Lobsterdust & DJ Giac bring a couple tracks from the recent Crumplebangers Disco Challenge. Nintendo finally released Pokémon Scarlet & Violet, so iWillBattle pays tribute with a track from the Mashémon album. DJs From Mars brings an “Unholy” banger, while reconthuse throws it back with a song from The Proclaimers that’s NOT “500 Miles.” Yours truly puts in two darkwave appearances here, including an accidental tribute to the late, great Irene Cara (this mashup was made before she died last week). And finally, DoM gives us an end-of-the-night slow jam perfect to close out any ’80s party. – Adriana A

Adriana A – Glory Box or Lose It (Portishead vs. Vitalic)

iWillBattle – The Edge of Johto (Lady Gaga vs. Pokémon)

reconthuse – Then I’m Without You (The Proclaimers vs. Avicii feat. Sandro Cavazza)

DoM – I Will Always Love You Under The Purple Rain (Whitney Houston vs. Prince)