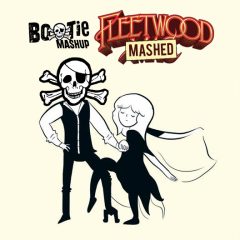 I’ve been working on this Fleetwood Mac mashup album off and on for years, curating and compiling various playlists, but never finishing it. Every time I thought I was ready to release it, a newer, better version of some Mac song would get mashed up by some enterprising producer, or I’d find a forgotten favorite of some deep cut and simply have to include it.
When quarantine started in March 2020, my first livestream on our brand-new Twitch channel was a Fleetwood Mac Mashup Listening Party. For five hours, I played nearly every FM mashup in my collection, soliciting feedback from the viewers. That sparked yet another set of mashups that got sent to me by various producers who tuned in. Whittling down all the quality mashups soon proved to be too difficult, so I did what anyone else would do — I made a “bonus disc” of material!
The proper album is filled with all the big Mac hits, many of them “Bootie Mashup classics” that get dropped on the regular at our parties. But if the main album is like all the coke the band snorted in the ’70s, then the bonus disc is more like a cup of chamomile tea. It’s a more chill affair, going deeper and offering up alternate mashups of some of those same hits, as well as lesser-known songs, including a bit of synthwave, which lends itself strangely well to Fleetwood Mac.
You can download all 36 tracks — basically a double CD, if you actually wanted to burn this old-school — as a convenient zip file in the link. Enjoy! – Adriana A
CLICK HERE FOR FLEETWOOD MASHED MIXTAPE with bonus disc + artwork

1. Lobsterdust – Till The Dream Ends (Fleetwood vs. Britney Spears)

5. DJ Tripp – Seventeen In The Attic (Stevie Nicks vs. Dance With The Dead)

6. Ryan Nellis – Part of Me Goes My Own Way (Fleetwood Mac vs. Katy Perry)

10. The Reborn Identity – Girls Like You Don’t Stop (Fleetwood Mac vs. The Naked & Famous)

7. Brat – Everybody Wants To Stop The World (Fleetwood Mac vs. Tears For Fears)

15. The Reborn Identity – Rumours Have It (Adele vs. Fleetwood Mac)

16. Titus Jones – Praying For A Human Landslide (Fleetwood Mac vs. Evanescence vs. The Killers vs. Kesha)

18. Instamatic – Her Breath Is The Wind (Rhiannon’s Breath) (Fleetwood Mac vs. Sia)