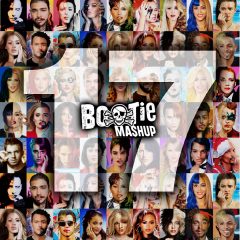 Seventeen years ago, we never could have imagined that not only would we still be throwing mashup parties but…. that they would only be happening online! It’s a whole new livestreaming world out there, but apparently when we pivot, we go HARD.

And just like so many others these past few months, we’re discovering just how WEIRD it is to have a birthday during a global pandemic. But we are HERE for it. Every year, we make a special anniversary CD, which we give away at our party in San Francisco, as well as at Burning Man a couple weeks later. It’s not quite the same as the year-end “Best of Bootie Mashup” mixtapes, but it’s a bit of a dress rehearsal. In Bootie Mashup’s entire 17-year history, we have never posted these online, preferring to keep these anniversary albums exclusively only available as hard copy CDs.

But of course, this year is different. In the Coronopocalypse, there ARE no IRL parties or events for us to hand out free giveaway CDs (and considering how obsolete the medium has become in the year 2020, that might not be such a bad thing.) So instead we are posting it online, but only for a limited time, in order to still maintain that “exclusive” thing. After Burning Man, this album will no longer be available.

For this compilation, the six resident DJs of Bootie Mashup’s Twitch channel — Adriana A, Tyme, Jupiter Gatling, Lobsterdust, Airsun, and EN8 — each picked out their top 3 mashups from the past year. These are the tracks that have been rockin’ our livestreams and keeping us sane (and dancing) during quarantine.