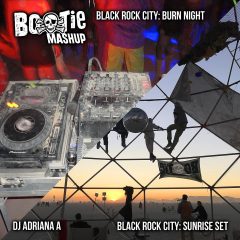 I’ve been going to Burning Man since 1993, but didn’t start DJing there until 2006, when we finally got so sick of all the mind-numbingly generic and vocal-less “oonse-oonse” of trance, techno, and dubstep that we decided that instead of bitching about it, we’d just start throwing our own Bootie Mashup parties out in Black Rock City.

In the so-called “Default World,” our brand of pop mashups are definitely considered more on the mainstream side of things. But at an alternative arts festival like Burning Man? Playing pop music felt fucking subversive. Hell, when we started, just playing songs with vocals felt like the most underground thing we could do out there. We didn’t even need to explain to burners that we were doing “mashups.” All we had to say was that we were playing “MUSIC WITH WORDS!” That was enough of a “unique selling point” on the playa. What we ended up doing in BRC was quite different from the typical Burning Man party, and we quickly found our people.

While now we throw Bootie Mashup parties every day of the week at various camps around Black Rock City, the first few years we only did two nights — Fandango and Automatic Subconcious, better known as AutoSub. This group of mostly Boston-based burners somehow adopted our little mashup party as their flagship Friday night party, and over the years, it eventually became a dusk-till-dawn affair. In 2011, the party finally lasted till the sun came up, and I did my first sunrise set — a tradition that has remained ever since.

These two continuous-mix DJ sets represent two different vibes at Burning Man. The first is a typical “Burn Night” party set, watching the Man Burn from the top of an art car, with lots of celebratory mashups about dust and fire, and “we built this city.”

The second one is the early morning “Sunrise Set” comedown, as the sky starts to turn light, and the sun rises up over the mountains in the distance, as we all huddle and hug each other under the AutoSub dome in the chilled morning air.

And because this is MUSIC WITH WORDS, yes, the lyrics all mean something. Hope this gives you the same Burning Man vibes I got while making it. See you out on the playa! – Adriana A 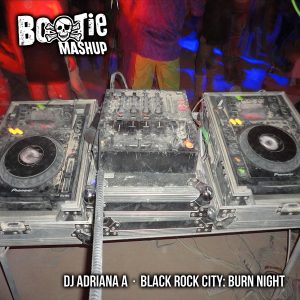 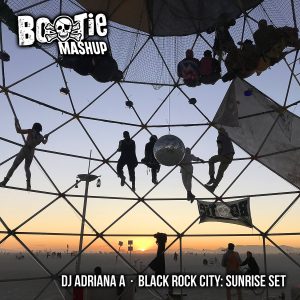 Black Rock City: SUNRISE SET
Check to see what time sunrise is, and then start this mix 35 minutes beforehand.