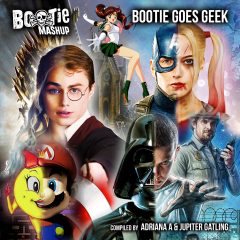 Just in time for what would have been San Diego Comic-Con International, it’s the long-gestating “Bootie Goes Geek” compilation, divided up into two “discs.” The first one was curated by Bootie Mashup’s resident anime-loving otaku, Jupiter Gatling, and the second one is from cosplay queen Adriana A.

Since none of us will be at San Diego Comic-Con this year, this mixtape will hopefully fill some of the void, containing mashed-up and remixed songs with a ton of pop culture references from the worlds of sci-fi, fantasy, comics, anime, and more! Basically, if it’s on here, then you’d also find it on the exhibit hall floor of Comic-Con!