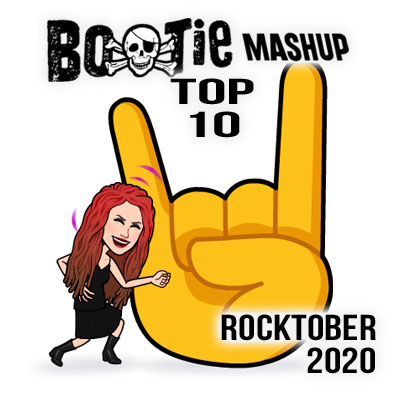 You know we love a theme, so this Top 10 celebrates Rocktober, with each mashup featuring one or more rock artists.

Kicking things off, it’s a mashed-up nod to the late, great guitarist, Eddie Van Halen, who sadly passed away from lung cancer earlier this month.

Then we get a bit meme-worthy, with the hardest rock mashup we could find of “WAP” (it’s always WAP o’clock somewhere) and a track that pays tribute to the TikTok meme (of the dude drinking juice while skateboarding) that put Fleetwood Mac’s “Dreams” back on the charts for the first time since 1977. Continuing the Stevie Nicks vibe is the latest Miley Cyrus single, which amply expands upon that song’s “Edge of Seventeen” sample. (We think Kalexandra’s is the best of the multiple versions on YouTube.)

Frat-bro-party masher White Panda blew up Kickstarter with a $100,000 campaign to create a “final” mashup album (something we here at Bootie Mashup find ethically questionable but contributed $10 to anyway, just so we could get access to the tracks.) “Watermelon Tribute” was the only superlative mashup off his recent “Nightcub Rejects,” so we can only hope the final product will justify the ridiculous fundraising.

German producer Marc Johnce, on the other hand, just released a fantastic 3-CD mashup album for free, and didn’t need to beg anyone for $100K to do it. His track here is from that album, a classic 2013 collab he did with Dan Mei.

Then we get a little hair metal, first from YouTuber Bill McClintock with Mötley Crüe, then with Pennsylvania band Chip & the Charge Ups, who recorded an incredible live mashup of Poison and Green Day.

Rounding out the Top 10 is the triumphant return of Aggro1, yet another bootlegger back from the dead, ostensibly due to Covid quarantine, and my favorite track from MasDaMind’s Broadway Musical Experience mashup album, which takes My Chemical Romance’s vaudevillian tendencies to its natural conclusion. Emo kids and drama club, unite! Jazz hands, everyone!

Bill McClintock – I Got Girls (I Feel Good) (James Brown vs. Mötley Crüe)

Aggro1 – Blinding Aerials (The Weeknd vs. System Of A Down)

MasDaMind – All Teenagers Jazz (My Chemical Romance vs. the cast of Chicago)