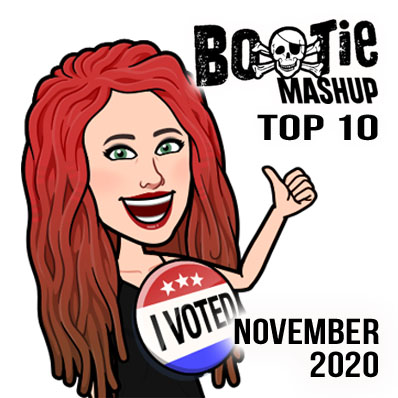 It’s the end of a tumultuous election season, so this month’s opener for the Top 10 should come as no surprise, courtesy of our very own Lobsterdust. Most of the rest of this month’s playlist comes from our extended Bootie Mashup fam and associates, from the U.S. to Scotland, Germany, and France.

The variety of tracks here (dance! rock! Disney! emo! Pee-wee Herman!) are definitely the sound of our Twitch channel these days, including a double-shot from the new production duo Zyle & Johnce, a collab between our new Twitch mod HyperZyle and longtime German producer Marc Johnce. Everyday is still Halloween with Titus Jones’ latest, but yes, it’s also already the Christmas season with the inevitable mashup of Mariah Carey vs. “WAP” (not exactly the same one that went viral on TikTok and YouTube, but a better-produced version from Lewis Wake).

Titus Jones – My Toxic Chick Is Going To Hell (Ariana Grande vs. Evanescence vs. Nicki Minaj vs. Halsey vs. Billie Eilish vs. Britney Spears)

Lewis Wake – All I Want for Christmas Is WAP (Cardi B & Megan Thee Stallion vs. Mariah Carey)

ToToM – Five Years Until The End (David Bowie vs. My Chemical Romance)