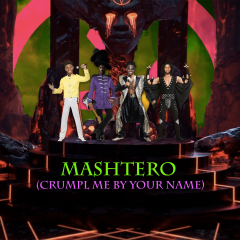 On April 16, 2021, as Bootie Mashup founder Adriana A was searching the interwebz for mashups containing the world’s #1 song that week — the sexy, buzzy, viral “Montero (Call Me By Your Name)” by Lil Nas X — she was massively disappointed by the lack of good, genre-clashed mashups, and she took to Twitter to express her dissatisfaction. (The original Twitter thread is posted below.)

It sparked a lively and spirited (and, admittedly, a bit mean-spirited) debate amongst a few people in the mashup community, most notably YouTube producer Logan Mashups, who Adriana A had called out in a now-deleted tweet. Inspired by the situation, Pom Deter and iWillBattle put out a “call to arms” for genre-clashed “Montero” mashups on the Facebook group Crumplbangers, known for their irreverent mashup work. The result of this effort just dropped today: 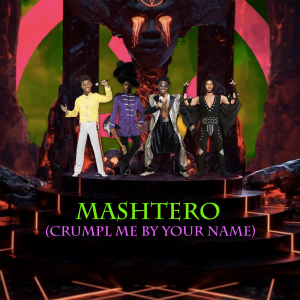 Mashtero (Crumpl Me By Your Name) — 28 tracks from 21 mashup artists, which is probably more Montero than any sane person can take. It’s not even ALL the good genre-clashed mashups that have dropped since, but there are definitely some gems here. And Adriana A even gets the opening track, with a Lil Nas X vs. The Cure mashup that she made in two hours, just to put her money where her mouth was! Free download available on the Crumplbangers web site!

And for Adriana A’s original Twitter thread that started this whole mess, here it is: 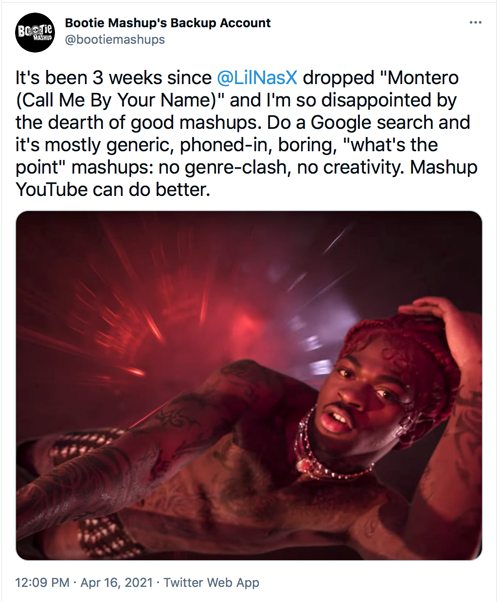 She continued in a series of tweets: Yet, those are the ones that rise to the top of the search listings. So disappointing that subpar work gets the attention, while the interesting Montero mashups with The Prodigy and Iron Maiden by @lewiswakedj and @iWillBattle barely have any views.

And as with most hip-hop songs, it’s really about using the vocal, as the instrumental is often minimal. So why is hardly anyone using the @LilNasX acapella? But if you ARE going to use the instrumental, at least @WilliamMaranci‘s mashup of Vanessa Carlson isn’t a bad way to go.

I know there’s pressure to keep pumping out content, a subject @oneboredjeu and @WilliamMaranci have both touched on in their tweets. But after 3 weeks, I really thought there would be much more interesting Montero mashups than what Mashup YouTube is providing. I have a theory…

I wonder if these producers are too young to have been exposed to more genres of music, or songs from more than 10 years ago, and that’s why all their mashups end up being “chart hit vs. similar recent chart hit,” rather that going for the classic mashup scene genre-clash?

Thank you, Crumplbangers, for responding to the call! Love live genre-clash!