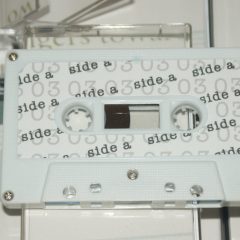 As PomDeter (producer of the infamous viral mashup sensation “Call Me A Hole”) reported on Mashstix two weeks ago, a mysterious box of “lost tapes” — 50 cassettes, to be exact — was recently rediscovered, apparently untouched for 14 years. The cassette tapes, seemingly titled “03,” appear to be a long-forgotten collaboration project of mashups from 2003, featuring previously-unknown bootleg producers such as Shock & Wow, Milton Flewid, and Charly Barley.

All the tracks have been digitized and are available now on Sowndhaus for free download.

The cassettes were discovered by a U.K. woman, going by the Mashstix username “karen79,” who found them while clearing out her late father’s attic. Apparently, her father used to work for a small duplication plant in the London area, which went out of business in 2007.

It’s no surprise that these tapes were discovered in the U.K., since in 2003 — the year Bootie started, incidentally, and long before the rest of the world even knew what a “mashup” or “bootleg” was — the U.K. was the hotbed of the nascent mashup scene, with scores of producers trying their hand at this then-new musical art form. These cassettes are obviously an artifact from this budding U.K. mashup scene, featuring many musical artists of the time, including Britney Spears, Destiny’s Child, Missy Elliott, Sean Paul, Shaggy, and Eminem.

The actual “lost tapes” are now for sale on Bandcamp, priced in British pounds at £3.50 each. Apparently, only 50 of these cassettes are known to exist, and the Bandcamp page claims: “We only have a limited amount available. Don’t miss out on owning a piece of mashup history.” It also includes unlimited streaming of Mashups 03 via the free Bandcamp app, plus high-quality download in MP3, FLAC and more.