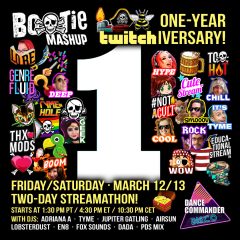 It was one year ago this week. On Wednesday, clubs and venues in California got shut down. On Thursday, we signed up for Twitch. On Friday, DJ Tyme did the first test stream, and later that night, Lobsterdust did a short trial-run DJ set. Then on Saturday, March 14, 2020, DJ Tripp did our first “official” Twitch DJ set. Except it didn’t really work, and we ended up hosting DJ EN8 instead. 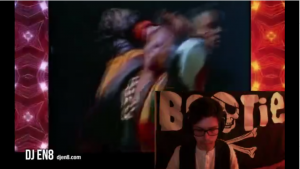 At least, I’m pretty sure that’s how it all started. Jupiter Gatling, Tyme, and myself — Adriana A — tried to piece together the entire timeline a while back, when we all took a moment to sit back and go, “How the hell did we DO all this?” But in those first few heady weeks of the Covid-19 lockdown, with all of us in quarantine, scrambling to learn how to livestream to Twitch on the fly, unsure of how any of us were going to survive, the details might have gotten a little fuzzy. It was a crazy time.

But now, here we are, one year later. Our first “Twitchiversary!” To celebrate, it’s all hands on deck, as we plan to do at least 51 hours of continuous livestreaming, starting on Friday, March 12th, at 1:30pm PST / 4:30pm EST / 10:30pm CET, and continuing through Sunday afternoon. Check our DJ schedule and pop in this weekend and join us: Twitch.tv/bootiemashup

We are so proud at what we’ve accomplished during “these unprecedented times.” We’ve had a fairly consistent show schedule locked in place since that very first weekend, with only a few changes along the way. DJs Airsun, Dada, and Fox Sounds have all joined our crew, and we have guest DJs like PDS Mix, King of Pants, and DJ Forge. And we’ve built up an amazing community of mashup fans — affectionately known as our ChatPod™ — people we never would have reached had we only stuck to throwing parties in a few cities, like we had been for 17 years. 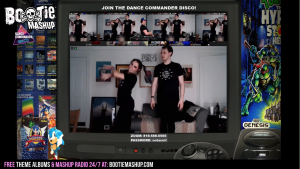 Just like our IRL events in the Before Times, weekend theme parties continue to very much be our “thing,” often spurred by costume ideas from the Dance Commander Disco, the Zoom party that happens alongside our weekend Twitch streams. Any crazy idea we have for a theme, we usually try it out eventually, and that keeps things interesting not just for ourselves, but hopefully for our viewers as well!

And due to our Twitch channel, we now feel more connected to the greater mashup community than we have in a long time — not since the early ’00s days of the GYBO message board — since so many producers drop by our streams, and we’re able to chat in real time, sharing stories and jokes about our little microcosm of mashup culture. 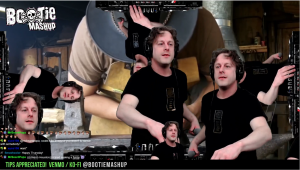 TwitchMetrics says we’re currently ranked as the #115 most-watched English Music channel. We stream around 32 hours a week, and have somehow amassed nearly 22,000 followers. The most viewers we ever had at once was 2,573, thanks in large part to Matt Mercer and Marisha Ray — from the Dungeons & Dragons Twitch show Critical Role — tweeting about us several weekends in a row, while their channel was on hiatus due to the lockdown. It’s been a wild ride so far, but it’s also kept us all sane while our regular parties have been shut down. 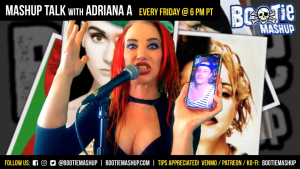 Unlike most channels on Twitch, ours isn’t just one person, but rather a team of mashup DJs, and I love being the “Queen Mother” of this amazing crew of humans. We’ve all been inspired by each other, have learned from each other, and the collective approach to building this channel has made us all feel a little less isolated while in quarantine this past year. Also, I’m very proud of the fact that while I can’t pay people the same that I used to for DJing at the club, I’ve been able to share with everyone the revenue we earn through subscriptions and cheers. Trust me, every little bit helps, so THANK YOU VERY MUCH for subbing to our channel!

We. Will. Never. Stop. Streaming. 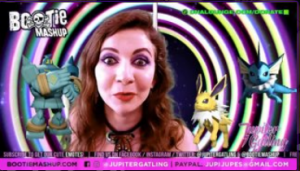 Even though we’re starting to finally see some hope that this pandemic will end, with vaccinations well under way, and predictions that things will be opening up again soon, we have no intention of ending our Twitch channel, even after we start throwing parties again. The genie is out of the bottle, and we have been loving this new platform to share our love of mashup culture with the world — especially for those who can’t come to one of our real-life events.

Thanks for coming along for the ride by being a part of our community, and here’s to another zillion “Twitchiversaries!” Hope to see you during our 2-day streamathon this weekend!