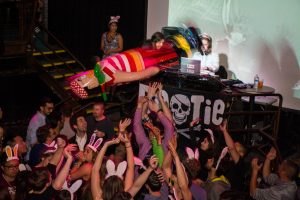 Our inflatable pirate mascot, Hookie, gets tossed around the crowd.

After 16 years and 619 parties, Bootie Mashup is leaving DNA Lounge. It feels a bit like a break-up, and appropriately, our last party there is the Lovers Ball this Saturday February 12. There are no hard feelings though — DNA Lounge will always feel like “home.” It’s just that right now isn’t “a good fit” for either of us. We had a good run, but due to the pandemic and DNA’s unique rules, restrictions (and rent), it’s just the right time for us to move on to Rickshaw Stop on Saturday March 19. Maybe we’ll be back someday. “I will always love yooooooooou…” 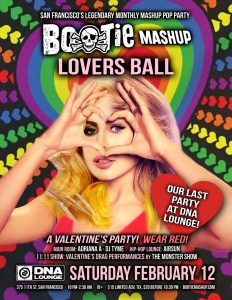 Our last party at DNA Lounge is this Saturday February 12.

And now the long version…

Yes, it’s true, we are sadly leaving DNA Lounge — the venue that has felt so much like home that we affectionately referred to it as “the mothership” of our parties. We’re moving on to other San Francisco venues, namely a series of parties at Rickshaw Stop, and a special Pride Weekend event at Oasis. Much like our parties in LA, New York, and Seattle, we’re going into a “polycluberous” phase, and trying out other venues. But who knows? Maybe in a post-pandemic time, we’ll be back at DNA. But right now, as they say, it’s simply “not a good fit.”

This Saturday February 12 will be our last party at DNA Lounge, maybe forever, maybe only for a while. Never say never. The theme is the Lovers Ball, and while the Valentine’s theme was chosen long before we knew this would be the final party, it feels strangely appropriate, as it all very much feels like a bittersweet break-up after a long — VERY long — relationship. Hell, Bootie Mashup’s relationship with DNA Lounge has even outlasted the relationship of Bootie’s creators, Adriana A (that’s me) and Mysterious D. If you count the fact that Bootie originally started there as an upstairs lounge takeover of DNA’s Pop Roxx parties, it’s actually been 17 years. That’s literally an ETERNITY in nightlife years. Most parties don’t even last a year. It’s been a good run. 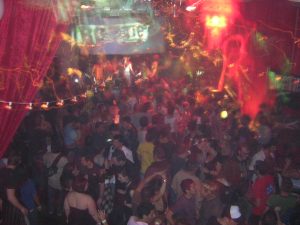 Our 2-Year Anniversary Party at Rickshaw Stop in August 2005.

Back in 2005, already two years into throwing our little mashup party, we already knew we were outgrowing Cherry Bar, the now-defunct space where Bootie began. We did our 2-Year Anniversary Party at Rickshaw Stop and sold the place out with over 500 people, with a line around the block all night. We tried to move the party there, but at the time, Rickshaw Stop was focused on booking bands, and didn’t want a Saturday night club like Bootie. So in March 2006, we instead moved to DNA Lounge, and other than a few parties at Mezzanine after DNA got shut down for ABC (Alcoholic Beverage Control) violations, we’ve been there ever since.

We were monthly for two years, then went twice-a-month in 2008. Two years later, we added a 3rd Saturday, and about a year later, in April 2011, we became DNA Lounge’s flagship weekly party — nearly 8 years after we started. Obviously, it was a slow build-up over time — and it continued to build. 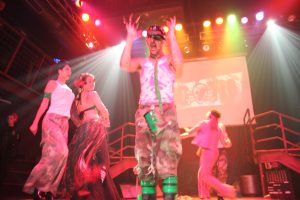 In SF Weekly‘s Best of SF 2013, we won “Best Place To Dance If You Take A Wi-Fi Enabled Bus To Work,” a sign-of-the-times if there ever was one. San Francisco was experiencing a massive influx of fresh-faced tech workers who had just moved to town. They all had well-paying jobs at Google and Apple, and tons of discretionary income to spend. It was Bootie Mashup’s duty to introduce these recent transplants to the old-school, outlandish, fun, queer, creative spirit that was the hallmark of San Francisco nightlife.

That’s why, despite being a dance party, we always insisted on breaking up the night with the 11:11 Show — live rock from our house band Smash-Up Derby, burlesque from Hubba Hubba Revue, drag from The Monster Show, circus aerialists, pole dance, whatever — but all wrapped-up in an easily-digestible candy-colored shell in the guise of a fun dance party featuring mashed-up versions of sing-along pop hits. So-called “real DJs” (i.e. SF’s notoriously snooty electronic dance scene) hated us, but it’s easy to not care when you’re drawing 1700 patrons every Saturday night, which was our peak average in 2014. Hell, in 2016, we set an attendance record with our Beyoncé vs. Rihanna party drawing 2,912 people. There’s a reason DNA Lounge was able to buy two other venues and the pizza place next door. We were their cash cow. 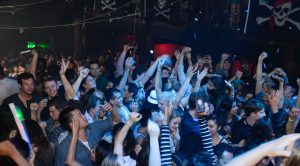 A part of the crowd at our biggest party ever in 2016, which at 2,912, holds the record for highest attendance ever at DNA Lounge.

But of course, nightlife culture ebbs and flows — and all those millennial techies got a little older and stopped going out as much, while artists and other creatives got priced-out and moved away. At DNA’s insistence, we went to 18+ in 2019, especially since we were the last 21+ holdout, and DNA was gaining a reputation as THE place to go if you’re under 21. We entered into a new partnership with PLUR Alliance (who booked the rave DJs and events next-door at Above DNA and Dazzle Room). The parties and themes were on an upswing and then… the Coronapocalypse hit. 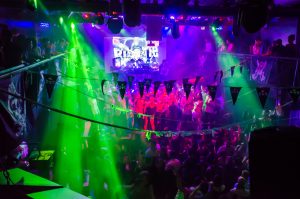 Fifteen months (and a pivot to livestreaming on Twitch) later, California finally re-opened in June 2021 — and it was a glorious 6 weeks. We all thought the pandemic was over, and Bootie Mashup was attracting numbers like it was 2017 all over again. But then, Miss Delta came to the party, and the new vaccination requirements literally chopped our 1100+ attendance in half overnight. Mask mandates the following week further eroded our numbers. And it’s been tough going ever since. Turns out it’s hard throwing parties during a plague. 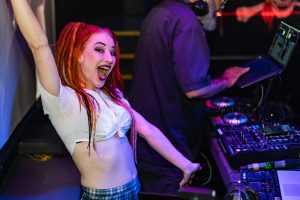 Bootie Mashup founder Adriana A DJing at our #FreeBritney party in 2021.

While DNA Lounge’s uber-strict vaccination policy for entry at first seemed admirable — the owner takes great pride in the fact that they have the strictest vax entry policy in the country — for months, it sadly excluded anyone vaccinated outside of California (or CA residents who didn’t have the proper QR code), meaning we were turning away hundreds of legitimately-vaccinated people, week after week, month after month. Technically, not even myself or Jupiter Gatling were allowed at the club, because we were vaccinated in Germany. We’d watch entire groups leave, simply because they had one vaxxed person in their crew who couldn’t come in due to being from out-of-state and not having the “correct” QR code. When you’re a weekly party (and not just a special one-off), that sort of thing has a cumulative effect. Angry patrons leave their 1-star Yelp review, go across the street to another club, and never return. 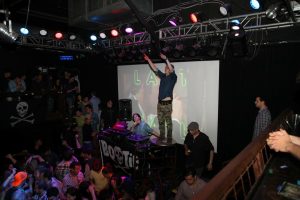 DJ Tyme riles up the crowd.

To be fair, in recent weeks, DNA Lounge has gotten the proper apps and started accepting a few other state’s and country’s vaccination QR codes. But because they are a 500+ capacity venue, the city now also requires a booster shot for entry, which will further put a dent in potential attendance.

Despite all of this, we were still averaging nearly 500 people every week. That is, until Omicron hit. December and January are traditionally slow months in nightlife anyway, pandemic or not. But then DNA insisted we go back to 21+, despite the fact that EVERY OTHER EVENT there is either 18+ or all-ages. By this point, half our audience was under 21. Because of this, DNA Lounge complained they weren’t selling enough drinks, which… well… duh. We predicted this would happen when we went 18+ back in 2019. Between Omicron, the new booster requirement, going 21+, and a typically slow January, it was a “perfect storm” for attendance to drop to less than half overnight. I started getting those “I think we’re breaking up” vibes. 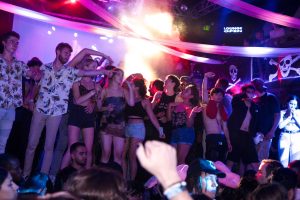 Are you all gonna miss dancing on that stage?

Needless to say, it came as no surprise when they told us we were getting bumped from weekly to monthly. But then they also changed the terms of our long-running rent/promotion agreement (which still insisted we be a 21+ party) and, well…. I can take a hint. I crunched some numbers, asked for our last two parties to go back to 18+, and made the difficult, heartbreaking decision to quit DNA Lounge and move the party to Rickshaw Stop in March.

Despite everything, I want to emphasize, there are no hard feelings here. We are leaving DNA on good terms, with the full acknowledgment that under the right circumstances, we can come back — maybe as a one-off, maybe something more regular. Who knows? DNA Lounge is a fantastic venue, and we LOVE the staff — but it’s a big, challenging space to fill every week during a plague, especially with two rooms. And right now, we’d rather have a fun, enjoyable party at a place we know we can pack. 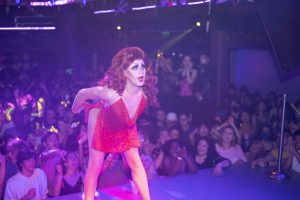 DNA Lounge already has a bunch of pop-friendly programming lined up for their Saturday nights — “Bootie Unmashed,” if you will — and we know we built that template and laid the groundwork to make them a go-to nightlife destination for pop-themed parties. We are proud of that legacy, and thankful for the sandbox they gave us to experiment and play with our crazy mashed-up theme parties all these years. Even if we never return, DNA Lounge will always feel like “home.”

“I will always love yooooooooou…”