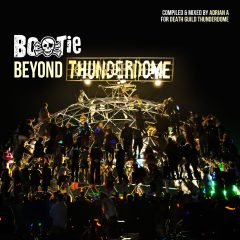 Since 2008, Bootie Mashup founder Adriana A has been DJing a special set of mashups for Death Guild Thunderdome, a Mad Max-inspired fixture at both Burning Man and this week’s Wasteland Weekend (where we’ll be doing Bootie Wasteland).

In the dome, two fighters get strapped into bungee cord harnesses and battle each other with foam bats, while the festival crowd cheers them on. The mashups chosen for this set are meant to fit the Death Guild aesthetic of dark, angry energy, while also having some of that cheeky Bootie Mashup vibe, often with pop vocals meant to troll the fighters in the dome!

Over the years, these tracks have become staples of the Bootie Thunderdome set, with some dating back to the early days of mashup culture, featuring classic ’00s work from bootleg producers who have long since retired. There’s plenty of goth, industrial, and rock on this mixtape, which is pretty much what you would expect for the soundtrack of the Thunderdome fights!

2. The Kleptones – Voodoo Sabotage (Beastie Boys vs. The Prodigy)

4. DJs From Mars vs. Lobsterdust – Breathe In The Name Of Gay Bar (Queen vs. The Prodigy vs. Electric Six vs. Rage Against The Machine vs. Skrillex)

9. g4gorilla – Changed The Way You Hurt Me (Culture Club vs. Example)

15. Lobsterdust – Smash My Bitch Up (Smashing Pumpkins vs. The Prodigy)

16. DJ Morgoth – You’ve Got Another Firestarter Comin’ (Judas Priest vs. The Prodigy)

20. DJ Axcess – Our Solemn Bitch (Ludacris vs. Within Temptation)