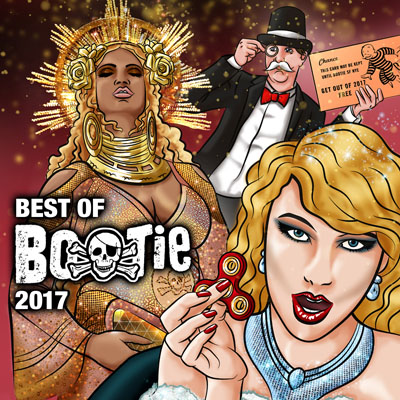 Choosing which mashups to include on this year’s Best of Bootie 2017album was easy. Adrian A and Mysterious D — co-creators and resident DJs of Bootie Mashup — each chose their 10 favorite tracks to include on the album, plus 5 bonus tracks.

However, the selections were such a diverse mix — showcasing the ever-widening range of the mashup genre — that assembling them into a cohesive mixtape proved challenging, to say the least.

Needless to say, this year’s collection is one of our most eclectic yet, spanning a broad range of musical genres and eras. While we tried to focus on both songs and mashups that were released this past year, ultimately, this mixtape simply represents what Adrian A and Mysterious D were each spinning at various Bootie Mashup parties in 2017.

There are a couple of exclusive, previously-unreleased tracks, including the debut solo production from Daedra — aka Bootie’s co-founder, Mysterious D — who opens the album with Taylor Swift being put to task by Cardi B’s mega-hit with Ready for Bodak. Bootie LA’s DJ ShyBoy offers up his brand-new Mi Gente Despacito, which showcases 2017’s Latin pop chart explosion. Ed Sheeran’s “Shape of You” wins the award for Most Mashed-Up Song of 2017  — and since Adrian A couldn’t pick just one, they put together Shape of Mashups, a mega-mashup featuring parts from five different producers. (And included another as a bonus track.) And Entyme returns to do another Bootie Intro.

As usual, this 75-minute mix is meant to encapsulate a night at a Bootie mashup party — from the first get-you-on-the-dance-floor moments, to the fist-pumping bangers, to the drunken sing-alongs, to the kooky oddball tracks, to the slow jams at the end of the night. Shout-out to EN8, for mixing it all together.

MIXED VERSION: Click the red box below to download a ZIP file of the fully-mixed 21-track album + artwork.

UNMIXED VERSION: Click here for a ZIP FILE of all 21 tracks, unmixed. For individual tracks, right-click the song titles in the track listing below, and be sure to check out the Bonus Tracks, also in a convenient ZIP FILE.

If you want just a giant 75-minute MP3 file, then right-click here for the Full Mix in one MP3.

Daedra – Ready For Bodak (Cardi B vs. Taylor Swift)

DJ Schmolli – Epic Love All Night (The Outfield vs. Icona Pop vs. Blasterjaxx vs. Dada Life)

Martti Sipelgas – Ready Or Not (The Fugees Drum & Bass Remix)

AnDyWu – Look What Toxic Made Me Do (Taylor Swift vs. Britney Spears)

DAW-GUN – Closer In A Fast Car (The Chainsmokers vs. Tracy Chapman)

DAW-GUN – The Love Cats In Ibiza (The Cure vs. Mike Posner)

Happy Cat Disco – Side To Side Baby (Ariana Grande vs. Dimitri Vegas vs. Diplo)

DJ Surda – No, No Scrubs (TLC vs. Meghan Trainor vs. Eminem)

Chocomang – Every Black Hole Sun You Take (Soundgarden vs. The Police)