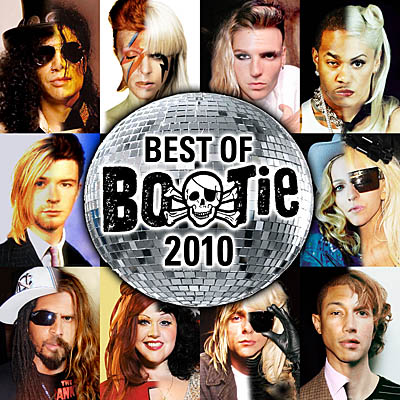 In-between planning an epic, sold-out New Year’s Eve party in San Francisco, our cat getting hospitalized for a couple days, and Adrian getting the full-blown flu during the holidaze, we SOMEHOW still managed to compile and mix this year’s “Best of Bootie” CD!

We did things a LITTLE differently this year, offering up the album in TWO VERSIONS:

There’s the nearly 80-minute “mixtape” version like we have in years past, meant to be compiled in order and burned on a CD, perfect for playing at parties (or your spin class). This is pretty much the soundtrack to Bootie, crammed to fit on one CD — from the early-in-the-night ramp-up tunes to the prime-time dancefloor bangers to the last-call drunken kookiness to the end-of-the-night sentimental slow jams. It’s like having your own personal Bootie party, on one CD!

Then there’s a second, “unmixed” version, with each track available as a full download – for those who like to mix-and-match their tracks, or simply not have the beginnings and ends of their mashups cut off when they use the “shuffle” function on their iPods. This version will definitely NOT fit on a CD.

We’ve also included our usual 10 Bonus Tracks, which contains some awesome tracks that just didn’t fit in the album.

Plus, this year we included something new, a BONUS ALBUM from our Brazilian brethren at Bootie Rio. The Brazilian mashup scene is exploding, and there’s no better showcase of that than the “Best of Bootie Rio 2010″ album, featuring 17 mashups from several Brazilian bootleggers.

THIS WAS A GOOD YEAR FOR MASHUPS!

We had a tough time narrowing down the list! When we couldn’t decide between two mashups that used the same instrumental source material, we simply made our own hybrid mix versions, combining both mashups into one track. We also had to edit many of the tracks judiciously, in order to cram 23 mashups into 80 minutes. Geek out and listen to the unmixed versions to spot the differences!

A special shout-out to all the bootleggers whose work made this album possible. DJs From Mars (actually, they’re from Italy) are certainly the stand-out producers this year. But many of our old favorites and various Bootie DJs are also included, as well as a few newcomers to the mashup scene. Again, it was very hard to choose, and if anyone is bummed that their mashup didn’t make it, know this: we didn’t even include our own A Plus D tracks! We truly tried to be objective and choose what we thought were the best tracks that match the Bootie vibe and make for a great compilation.

Let us know what your favorite tracks are! Personally, our favorite this year is probably Titus Jones‘ “I Wanna Bulletproof Dancer” … unless we’re in a chill-out mode, then we’ve gotta go with LeeDM101′s gorgeous “(Find Myself) A Heap of Love.” But that’s just us right now. The truth is, ask us next week, and we might have a different answer for you!

Download a ZIP FILE of the fully-mixed 23-track album + artwork in the red box below.

For the unmixed version, right-click the song titles in the track listing below, and be sure to check out the bonus tracks!

7.  Mashup-Germany vs. Faroff – Everybody & Ray Speaks No Americano (Yolanda Be Cool & DCUP vs. Backstreet Boys vs. Ray Charles vs. Benny Benassi) – Germany / Brazil

9.  DJ Tripp – Papa Was A Ghost (The Temptations vs. Deadmau5) – Santa Cruz, California

DJ Fox – Come See About Down (Jay Sean vs. The Supremes) – San Francisco

Mashup-Germany – Imagine One Day (So Far Away) (Matisyahu vs. John Lennon vs. blink-182 vs. Gentleman vs. Bob Marley) – Germany