Attack of the Killer Monster Mashups 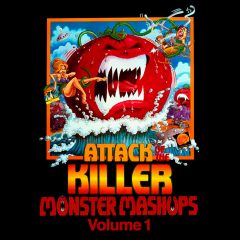 It’s our favorite season of the year — Halloween season! Our own “Halloween Booootie 7” mashup mixtape drops in a week, but in the meantime, check out this year’s Monster Mashup compilation, “Attack of the Killer Monster Mashups.”

Since 2004, Jeremy Girard has been releasing these compilations of Halloween-themed mashups nearly every year. The quality of the mashups on these comps has always varied greatly, but there are usually a few “killer” tracks on each one that end up being keepers.

This new one, however, is unlike past year’s efforts — I don’t know what happened, but the hit-to-miss ratio on this year’s 3-volume set is pretty high. With Halloween bangers from name producers such as Loo & Placido, DJs From Mars, DJ Cummerbund, Voicedude, and more, the overall quality far surpasses any of the previous editions. Volume 1 is especially solid. (Volume 2 is a much spottier listen, but still contains quite a few spooky gems.)

Volume 3, however, is an unexpected surprise — it’s just one 45-minute track, “Fettdog’s Imagining of Trent Reznor’s Musical Version of Jeff Wayne’s The War of the Worlds,” and it’s an immersive mashup audiobook of the H.G. Wells classic, as soundtracked with the music of Nine Inch Nails. Highly recommended!