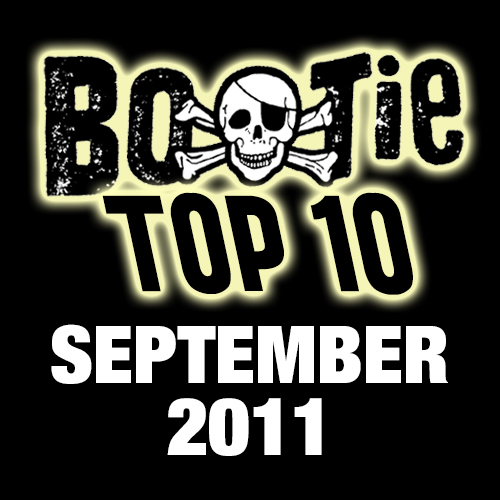 Despite being bogged down by our epic Bootie 8-Year Anniversary in San Francisco (yes, we’ve really been doing this for eight years!) … which included our own wild multimedia DJ set/show called “The A+D Show 3, This Time It’s Personal” … and despite doing Bootie BRC (our party at Burning Man) … we still managed to crank out a Top 10 for September, which includes many bootleggers making their first appearance. With a dozen tracks and three “double-shots,” the total is actually 15 mashups for you to download. So count those extra 5 tracks as our late fee!

3LAU – All Night Long (Ellie Goulding vs. LMFAO vs. Mann vs. Felguk vs. Darth & Vader)

A Plus D – Gucci Gucci Girl Power (Kreayshawn vs. Toni Basil vs. Le Tigre vs. The Ting Tings vs. The Trashwomen vs. The Go-Go_s)

Dylan Vasey – OMG You Changed The Way You Kiss Me (Usher vs. Example)

Elastic Productions – Never Be Afraid To Be Who You Are (Glee Cast vs. Westlife vs. Oasis vs. Cat Stevens)

Kap Slap – E.T. Feels Starry Eyed (Ellie Goulding vs. Bill Posters vs. Katy Perry vs. Modestep vs. Stellamara vs. Empire Of The Sun vs. Busta Rhymes vs. Xilent)

Titus Jones – Hello Girl, Lets Party Til The End (Martin Solveig feat. Dragonette vs. Britney Spears vs. LMFAO vs. No Doubt vs. Sum 41 vs. Vanilla Ice)