Bootie LA happens weekly - switching between The Regent and The Echoplex!

From New York City, Bootie LA is proud to present special guest DJ Lobsterdust. As “one of the premiere mashup producers in North America” (Mashuptown.com) as well as being the resident DJ at Bootie NYC, he mixes anything, from heavy metal to dub, and everything in-between, with a healthy dose of pop and electronic beats. Fatboy Slim called it “excellently eclectic stuff.” If you’ve ever wondered what Pharrell Williams would sound like with System of a Down, or what Bob Marley would sound like as the frontman for Iron Maiden, then you won’t want to miss this rare LA appearance! Plus, he’ll be celebrating his birthday at Bootie!

Joining him on the decks will be resident Bootie LA DJ ShyBoy, as they throw down the greatest mashups in the universe all night long. Performing the Midnight Mashup Show and keeping the energy flowing will be resident dance crew R.A.I.D., ready to fill the stage with their patented go-go insanity. Shutter Tribe will be in the house to snap all the fun so you can remember what you did! Plus FREE Bootie mashup CDs for the first 100 people through the door!

Launched in 2003 by San Francisco DJ duo A Plus D, Bootie was the first club night dedicated solely to the then-burgeoning artform of the bootleg mashup — and is now the biggest mashup event in the world, with regular parties in several cities on four continents. Voted “Best Club Night” for the past nine years, Bootie celebrates pop culture both past and present, keeping your brain guessing and body dancing with creative song combinations. Mixing and matching every musical genre, era, and style into one big dance party, it’s a place where everyone is welcome. And with free mashup CDs given away like candy, Bootie provides the soundtrack for the A.D.D. generation. 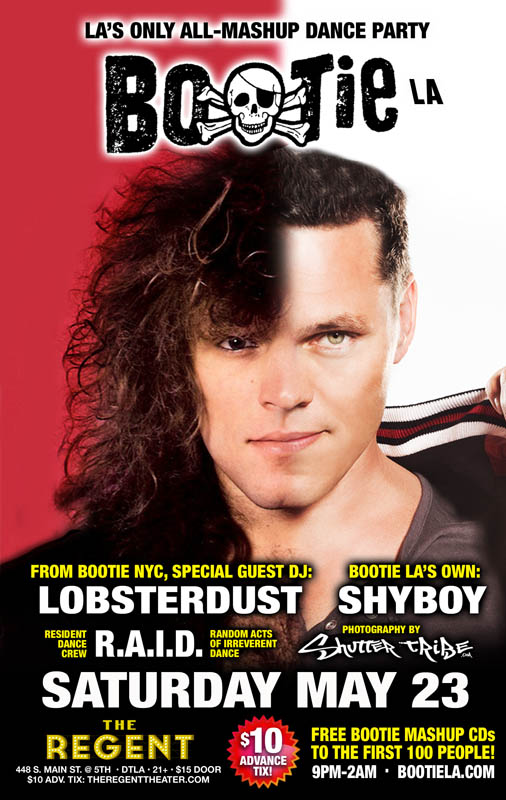