Not in Black Rock City? Browse all parties by city ›

Black Rock City's mashup party returns for its 14th year on the playa!

BOOTIE MASHUP is back in Black Rock City for EIGHT different gigs spread across SIX days! From late-night bangers to afternoon dance soirees to Mad Max-style fight sets to sexy fetish parties, there’s a Bootie BRC party for you!
With six different DJs, including Bootie Mashup founder Adrian A, as well as resident DJs Tyme, Jupiter Gatling, Airsun, Faroff, and Malderor, Bootie BRC celebrates (and satirizes) pop culture both past and present, keeping your brain guessing and body dancing with creative song combinations. Mixing and matching every musical genre, era, and style into one big dance party, it’s the soundtrack for the A.D.D. generation — with free mashup CDs given away like candy!
Launched in 2003 in San Francisco, Bootie was the first club night dedicated solely to the burgeoning artform of the bootleg mashup, and is the biggest mashup event in the world, with regular parties in several cities. 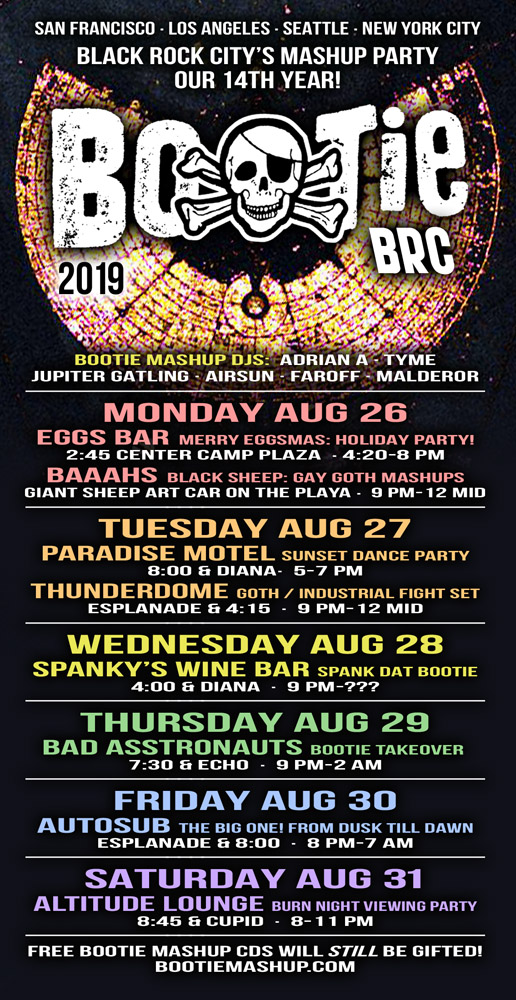