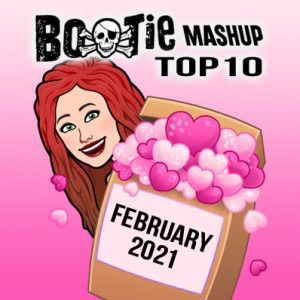 As much as I would like to blame the fact that this Top 10 is a little late because February is a short month, the real reason is because I was simply too busy packing up and moving to another country. But now that I’ve safely made it to Berlin, it’s time to play catch-up with a hot mix of mashups that soundtracked my move.

We just did our #FreeBritney party on Twitch, so there’s a pair of Brit tracks on here, along with a few fellow pop divas who have followed in her footsteps. A forgotten favorite Disney classic from retired producer Smija, plus tracks from ah!, Lewis Wake, and iWillBattle, all part of the Class of 2020 — more recent producers breathing new life into the mashup scene. Smashcolor, one of the mods on our Twitch channel, makes his first Top 10 appearance. And we close out with the first slow jam from Zyle & Johnce. (Also, I’d like to apologize in advance for Nickelback, made shockingly palatable as a synthwave jam.)

I promise you’ll get the March Top 10 before the end of the month!

Shahar Varshal – Save Your Tears Today (Eurythmics vs. Fleetwood Mac vs. The Weeknd)

Smashcolor – Alright, I’ll Love the Soul and Crush the Flux (Ariana Grande vs. Toto vs. Paramore vs. Train vs. Bloc Party)

Lewis Wake – Till The World Ends of Heartache (Britney Spears vs. Killswitch Engage)

ah! – The Way You Used To Drive (Olivia Rodrigo vs. Queens Of The Stone Age)

Smija – Man’s Red Fire (You Might Burn Yourself) (Busta Rhymes vs. The Jungle Book)

Lewis Wake – How You Tech Noir Me (Nickelback vs. Gunship)