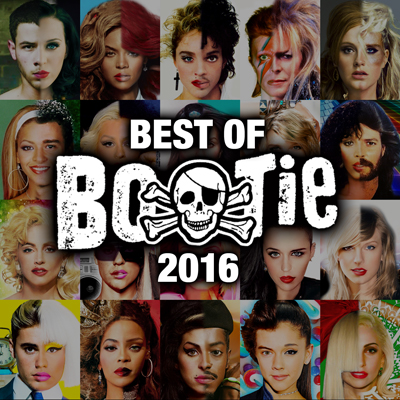 It’s not how you start, it’s how you finish. And after a somewhat lackluster year in the world of mashups — with many notable exceptions, of course — we have come to the end of 2016 with a Best of Bootie album that is 1/3rd new material that we’ve never showcased before on a Bootie Top 10, due to all the great mashups that have been released in just the past couple months.

This year’s compilation — just like every year — was chosen equally by Bootie creators Adrian A and Mysterious D, collectively known as A Plus D. The pair focused on mashups that utilized chart hits from the past year, to function a bit as a pop culture time capsule. However, they didn’t limit themselves to that criteria, especially if a mashup came out that used throwback material that hit a nostalgic sweet spot.

Britney and Beyoncé, the divas partly responsible for the two highest-attended parties in Bootie’s history (both at Bootie SF this past summer) are represented by a pair of double-shots. 2016’s two biggest fallen heroes — David Bowie and Prince — are represented with a couple cameo appearances. And of course, representing one of our favorite shows from 2016, there’s a “Stranger Things” mashup, because we’re big geeks.

As usual, this 74-minute mix is meant to encapsulate a night at a Bootie mashup party — from the first get-you-on-the-dance-floor moments, to the fist-pumping bangers, to the drunken sing-alongs, to the kooky oddball tracks, to the slow jams at the end of the night. Shout-out to EN8, for mixing it all together.

Download a ZIP FILE of the fully-mixed 21-track album + artwork in the red box below.

For the unmixed version, right-click the song titles in the track listing below, and be sure to check out the bonus tracks!

If you want just a giant 74-minute MP3 file, then right-click here for the full mix in one MP3

3. Titus Jones – Cherry Milkshake By The Ocean (DNCE vs. Kesha vs. Julie Andrews vs. Pitbull vs. Def Leppard vs. 50 Cent vs. Warrant vs. Kelis)

5. Happy Cat Disco – Get Down In Formation (Beyoncé vs. Me & My Toothbrush vs. Kool & The Gang)

9. Oki – Sesamy Generation (The Who vs. Sesame Street)

15. MixmstrStel – Into Self Control (Ariana Grande vs. Laura Branigan)

17. MixmstrStel – Roxanne’s A Hideaway (The Police vs. Kiesza)

19. A.L. – Gives You Roses (All-American Rejects vs. The Chainsmokers)

DJ Crossability – This Is How We First Date Kiss Right There (Blink-182 vs. Nicole Scherzinger vs. Katy Perry vs. Ellie Goulding vs. Olly Murs)

DJ Fox – Grape By the Ocean (Marvin Gaye vs. DNCE)

Lobsterdust – Where Is Cher Now (Cher vs. Jack Ü)

MixmstrStel – Since You’ve Been Geronimo (Kelly Clarkson vs. Sheppard)

mix4fun – Every Rose Has Faded (Poison vs. Alan Walker)